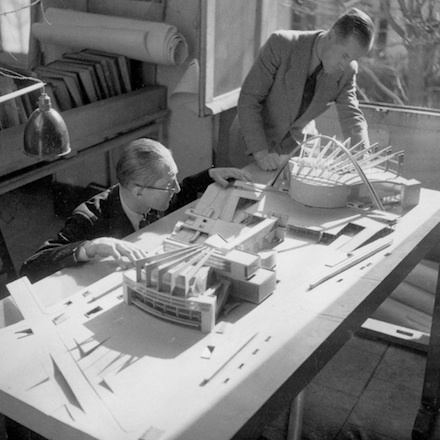 I found this image of Le Corbusier’s proposal for the Palace of the Soviets (1931) when discussing ways that Joe Pucci, a graduate student at Northeastern and a former intern at Utile, might represent his proposal for a mostly-temporary aquatics center for the 2024 Boston Olympics. Le Corbusier, a chroniclor of the evolving technology of airplanes, looks like he is preparing his the model for flight (to Moscow). Note the open window and the way that Corbusier and his assistant are doing a final systems check.

Corbusier was always looking over his shoulder at potential competition, and gossip has it that he saw Ivan Leonidov as a threat to his preeminence as the world’s most important avant garde architect. Corb set out to prove he could do Constructivism as well as the Soviets, but ironically after Stalin had embraced social realism as the officially-sanctioned style. The entry was was mocked by Pravda as a “congress hangar.” Frank Lloyd Wright was driven by the same competitive edge. The Johnson Wax Building, Falling Water, and Talisien West – all designed in the mid-to-late 1930s – sent a strong message that he was “back” and could do streamlining, Dutch de Stijl (that he initially influenced), and an earthwork with complex overlapping geometries better than anyone.

Maybe we should start strategically looking over our shoulders too!