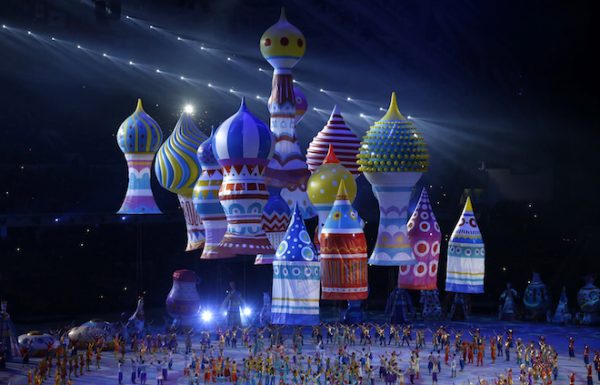 Alessandra Stanley wrote in the New York Times: “Putin may be hoping to use the Games to project Slavic power and Russian exceptionalism, but Friday’s immersion course in Mother Russia had an unmistakable glint of Hollywood make-believe and show-business pizazz.” Stanley made several references to Disney as the inspiration of the spectacle, implying that the show was decidedly lowbrow and therefore, not worthy of a more serious critical analysis. But if there was anything Disney about the design ambitions of the show, it was only the oblique reference to Disneylands’ original “It’s a Small World” attraction, a decidedly psychedelic take on international harmony.

There were other references to visual culture too. The stunning wood block print-inspired seascape that was projected on the floor bore more than a superficial resemblance to Rockwell Kent’s wood-block prints that illustrated the 1930 edition of Moby Dick.

While I am sure that there were more appropriately Russian references the designers of the ceremony were thinking of (too), I’m disappointed that Ms. Stanley didn’t expand her commentary to include a discussion of the specific visual characteristics of the presentation. Her critique floated above any kind of rigorous analysis and instead commented very generally on the relative sophistication of the aesthetics (“the . . over-the-top Slavic spectacle . . . (was) presented in a slick, Disneyesque package”) and the relationship between the rhetoric of the ceremony and Putin’s power (quite close). This resulted, partly I think, in her lack of knowledge of the sources of the visual imagery and the sophisticated way that the design of the production commented on more recent examples of culture that aims higher than lowbrow, while remaining accessible to a broad audience. Avatar and the spectacles of Cirque du Soleil were Sochi’s antecedents; but Sochi’s designers aimed to make a more ambitious cultural stew. I, for one, thought it was pretty fantastic.