I don’t know what’s in the drinking water in Chile, but several important and talented architects are designing pavilions and buildings that serve as a useful critique of the dominant sensibility of progressive North American architects. From the mannered digital explorations of Scott Cohen to the episodic work of the Patkaus, architects in the US and Canada have championed highly complex spaces and expression that derive much of their energy from the geometries and “forces” of a specific site.

Within the context of this almost-unquestioned fidgetiness, I found myself on the final review of a studio at the University of Texas taught by Sofia Ellrichshausen and Santiago Pezo of Pezo Von Ellrichshausen from Santiago, Chile. The class, unusual because of how carefully the design steps were scripted, started with students making matching spatial models of the churches in Rome. “These series of architectonic devices will be totally alienated from their content to be reconstructed as individual and autonomous formal structures.”

Once the students “knew” their church, they were then asked to push and pull its spatial components to provoke fresh ways to think about their prototype. “Each student will develop a personal transformation of a selected relevant case of the previous inventory. In order to enhance the singularity of the former figure, this unique case will be reproduced as a series of variations in the proportions of its members.”

Thus loosened up, students next applied a personalized and quasi-spiritual narrative to their proto-buildings and sited their projects on small uninhabited islands off of Chiloe Island in Chile. The proposals were required to be constructed of wood using indigenous technology (used to construct local versions of Roman Catholic churches on Chiloe Island), thus adding a measure of reality to stories that had more than a whiff of magical realism.

The whole point of the design methodology, it seemed, was to get the students to design their projects through an idealized and typological lens, rather than to seek an approach through a more conventional site analysis (or a programmatic analysis, for that matter). As a result, the resulting projects were equal parts Aldo Rossi, Louis Kahn, and Massimo Scolari. I was reminded of Scolari both because of the archaic/spiritual narrative and the watercolor renderings that each student was required to produce.

While the projects were a little bit too untransformed for my taste, given the promise of the process, the studio shed some important light on the work of Pezo Von Ellrichshausen, one of Utile’s favorite firms. 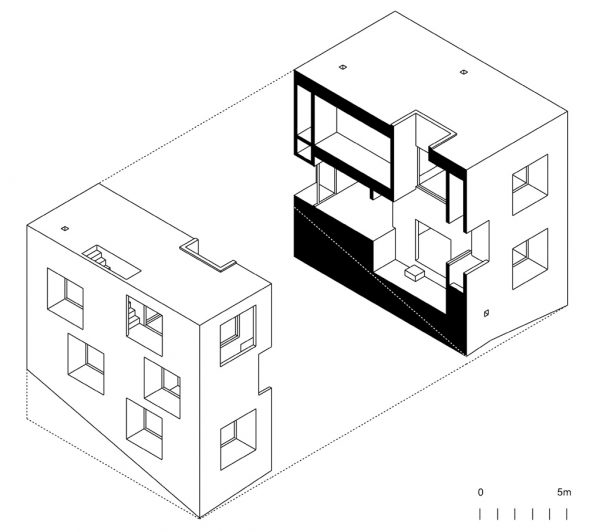