The Smokers’ Lounge as a Building Type

Just as the smokers’ lounge is about to go the way of the passenger pigeon because of the twin influences of public health campaigns and electronic cigarettes, the function has emerged as a bona fide building type. The elegant example below by ASK Studio – located in Des Moines and hot-off-the-presses from the Architects’ Newspaper – takes on the problem seriously and without any hidden moral agenda. As ASK principal Brian Schipper says in the article: “A shelter for smokers may seem a counter-intuitive undertaking, but it is there for safety and to make a better aesthetic for the community.” Cary Bernstein, one juror of the Residential Design awards program, innocently captured the unspoken contradictions of the project. “It’s the sort of structure that has the feel of a private clubhouse for the tobacco-initiated, it makes you want to smoke so you can be in it.” 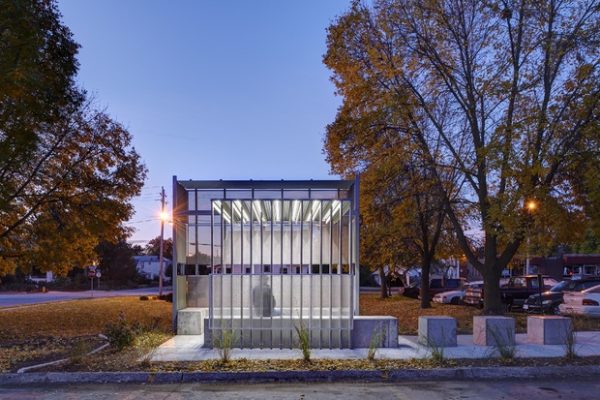 The project stands in marked contrast to a richly evocative vernacular version that I photographed at the back of the Boston Globe headquarters on Wednesday. One can (literally) still smell a group of cub reporters huddled under the canopy and out of the rain while taking a break from the day’s deadline.

Of course, this scene – and the building type – had a very short lifespan as far of “urban programs” go: from the early 1990s until the completion of the last known example in Des Moines. Like the last passenger pigeon in the Cincinnati Zoo, we should reflect on the lessons of the last smokers’ lounge while it still exists. After it’s gone, we can only look back with smugness and superiority about how we once acted as a species.