The Yale projects I saw a few weeks ago that were tackling the issue of an Olympic Village fell into two camps – projects that used the event as an excuse for more enduring urban design (albeit still ambitious) and projects that wallowed in the expo-ness of it all. This proposal by Nicholas Muraglia and Sarah Smith originated with an analysis of the chamfered buildings that make up Barcelona’s Eixample district and ended with a project that accidently backed into a language of architecture that evokes Expo ’67 in Montreal, Cambridge Seven’s National Aquarium at Baltimore’s Inner Harbor, and Debra Sussman’s work for the 1984 Los Angeles Olympics – all projects that were a more whimsical response to the heaviness and seriousness of Brutalism and/or the lightness and seriousness of Mies van der Rohe’s American corporate work. While the proposal by Muraglia and Smith is too tropical in flavor (the sampling of Rio’s Burle Marx paving patterns has a way of setting a mood), maybe de novo urban districts in Boston should strive for the unexpected giddiness of this scheme. Boston is a crazy-quilt of diverse urbanisms as it is – from London-inspired Beacon Hill and the South End, to the French-inspired Back Bay, to the mid-Century modernism of Government Center – why not add another distinctive place, check-to-jowl with South Boston’s classic triple-decker fabric? 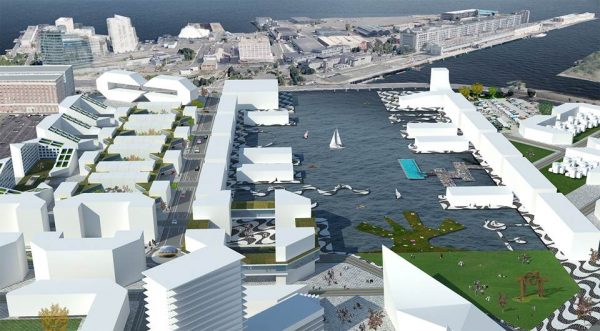