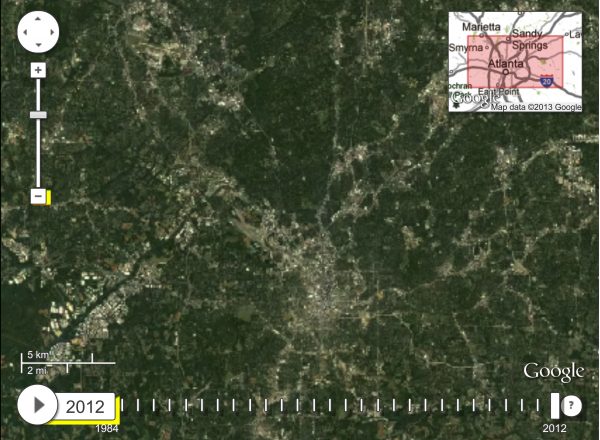 In case you haven’t seen it yet, prepare to have your mind blown, your conscience weighed upon and your day consumed. Google and Landsat have partnered to prepare this interactive map, called Google Earth Engine, that shows in time-lapse photography the changing earth’s surface. What’s particularly alarming, if you’re a child of the suburbs like me, is to watch your hometown develop. In my case, Atlanta.

If you know Atlanta, you know that Metro Atlanta (not the city, as I often defend it) has grown unhinged and unimpeded in the past 30 years. It’s interesting to see that for the most part, it has grown in a radial, almost linear, fashion along major interstate corridors. Makes sense, of course, but watching undeveloped land consumed is rather disheartening. Utile’s hometown, Boston, has faired a bit better than many cities, largely due to its age and land constraints. Still, it’s not immune to it.

So have fun! Watch polar ice caps melt, coastlines get fabricated in the Middle East and retreat elsewhere, and the Amazon slowly deforested. Then go out and ride a bike, and feel somewhat self-satisfied, if you live in a city.