Jay Tsai and Miron Nawratil, two students at the Yale School of Architecture, proposed a not-so-far-fetched alternative to the current plans for alleviating the shortage of track space at Boston’s South Station. MassDOT’s current plan is to re-locate the existing post office facility to provide space for additional tracks, opening up options for expanding commuter rail service to underserved communities. In Tsai and Nawratil’s proposal, the Fort Point Channel is dammed and drained south of Summer Street (think The Netherlands) to create more than enough sub-surface space for the ideal future track capacity of the station. The benefit is a fully subterranean train station, allowing for the redevelopment of both the existing and new track areas for urban development that can knit the Leather District directly to the loft buildings in the Fort Point District.

Just as importantly, the new South Station headhouse will provide views north across Fort Point Channel and Boston Harbor to visitors first arriving in Boston. Only the train station in Venice provides a comparatively dramatic view. Commuters and visitors would find water taxis and ferries directly across Summer Street. Importantly, the new tracks and station could be built while the existing station is fully operational. With only a flip of a switch, trains could be directed into the new station, freeing up the old facility for demolition – except for the historic headhouse, which would be saved as part of a redevelopment plan.

The project, done for a post-professional studio co-taught by Ed Mitchell, Fred Koetter, and Aniket Shahane, is just another thought-provoking urban proposal done in the urban design-focused architecture studios conceived and taught by Mitchell and his colleagues. More on Mitchell’s other recent studios – focused on New Bedford, Taunton, Providence, and Brooklyn – later. 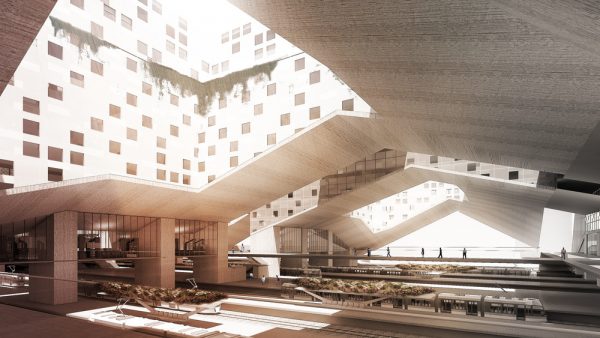