Utile is kicking off a planning study for the Worthington Street District in Downtown Springfield that was recently affected by a gas line explosion, damaging dozens of buildings. As we drove through the district, we were welcomed by this building wall. The scars of the stairs from the adjacent building were used like a section for a non-existent building. I’m a fan of building as a canvas for public art, graffiti, murals, etc. It’s always a pleasure to stumble upon a distraction in the sometime relative uniformity of structures. I like an exercise of ingenuity, of seeing how public art is applied onto otherwise neglected structures.

This reminded me of the time I’ve spent in Philadelphia, where I’ve always marveled at the number of murals in the city. 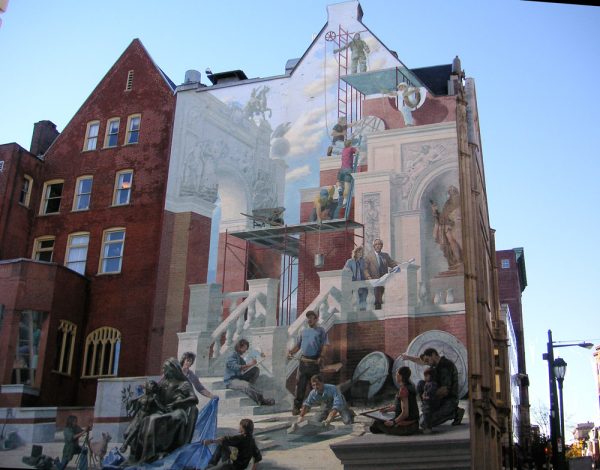 I came to learn that many are a result of the Mural Arts Program, an initiative that Mayor Wilson Goode instituted in 1984 ( and further promoted by Mayor Ed Rendell), as an effort to combat blight and graffiti in Philadelphia neighborhoods.  Jane Golden has been the driving force behind the program. Under her leadership there are now 3,600 murals in Philly that dot the civic landscape. The one above is a mural I often passed at 12th and Walnut. I like the character of it. It seems to straddle somewhere between Early Italian Renaissance and WPA-style Social Realism. More importantly it was an orienting device in the city. And yes, I realize that Philadelphia’s streets are all trees and numbers, but this is an added benefit of public art.

Another excellent group to check out is this http://livingwallsatl.com/walls/. Living Walls has begun mapping the murals in the city.