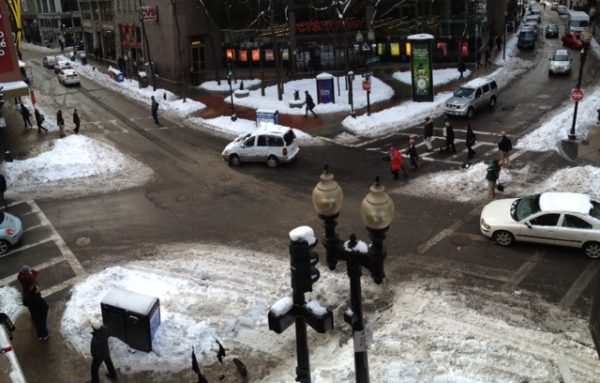 The view from Utile World Headquarters at Summer and Arch Street. Can you spot the sneckdowns?

While some may be bemoaning the latest winter storm to blanket the east coast, those of us who enjoy winter sports and innovative urban design strategies have something to be thankful for: 2014 is the winter of the sneckdown! For the uninitiated, the term is a combination of “snow” and “neckdown” (clever, isn’t it?) that describes a new fad in urban place-making. The neckdown and its variants are well known strategies for slowing vehicular traffic and creating more pedestrian-friendly streets. The sneckdown is the neckdown’s ephemeral cousin, cropping up only when a fresh snow covers the city. Automobiles quickly delineate their preferred paths of travel, leaving the sneckdown to serve as means of defining spaces that could be reclaimed by pedestrians. It’s an idea that seems to be going viral, with sightings in Philadelphia, New York, Denver, and even across the pond.

The question is: will summer’s sunshine and blue skies melt away winter’s dreams of urban reconfiguration? Or will sneckdowns find a permanent home in the toolkit of small-scale urban design, akin to the rise of other tactical urbanism projects in recent years? Stay tuned!

BONUS: Proposed theme song to be listened to while scouting for sneckdowns in your neighborhood!