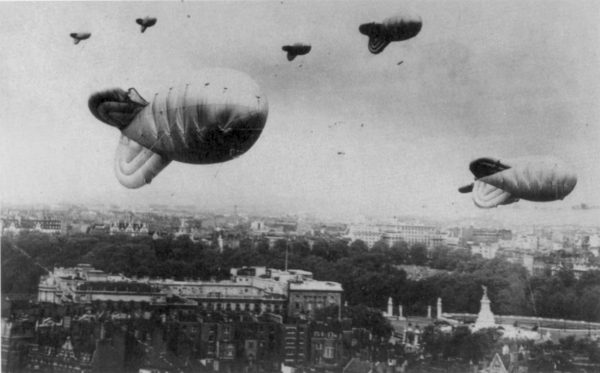 In 1938 the British Balloon Command was established to protect cities and key targets such as industrial areas, ports and harbors. Balloons were intended to defend against dive bombers flying at heights up to 5,000 feet (1,500 m), forcing them to fly higher and into the range of concentrated anti-aircraft fire—anti-aircraft guns could not traverse fast enough to attack aircraft flying at low altitude and high speed. By the middle of 1940 there were 1,400 balloons, a third of them over the London area (from Wikipedia).

Amazing that these almost-adorable balloons were the final line of defense against German dive bombers (in all ways their aesthetic counterpoint). Their casual floppiness are also a nice antidote to the shiny, hard, and shapely architecture that dominates the media lately (think Zaha), partly because contemporary rendering techniques encourage complex and slightly reflective surfaces. We have been toying with pneumatic structures lately – as has Roger Sherman, our creative partner and design muse in Los Angeles.

“The Roger Sherman Architecture/Urban Design (RSAUD) team designed a super-scaled, family-focused, all-season recreational park in the form of a tipped-over Empire State Building, with alternating levels of parking and other uses, for a 30-acre lot in Ronkonkoma serving a major Long Island Rail Road (LIRR) station and regional airport” (from the Long Island Index).

And of course, if I am riffing on pneumatic architecture, I couldn’t leave out Archigram’s Instant City proposals. This version, depicting an installation at the intersection of Santa Monica and San Diego freeways (1969), isn’t too far from Roger’s house and office.