I was on the most recent Texas Society of Architects Design Awards jury with Andrea Leers (Boston), Marlon Blackwell (Fayetteville, Arkansas), and Mark Reddington (Seattle), and like my experience on other out-of-state juries, I was able to step outside of our Boston bubble and get some perspective on the architectural priorities in another region.

The first thing you should know about Texas is that the honest expression of stone, wood, steel, and glass is king and most typically deployed in large houses on wooded suburban lots, the Hill Country west of Austin, or on “ranches” (think oil and not cows). The work is so persistent – and good – that it dominated the middle rounds of our jury deliberations. Reactions veered from admiration for the crisp tectonic resolution (with many components and details that would not work in the Northeast) to guilt that we were fawning over houses for the one percent. But after our crash course in the Contempo-Texas House Style, we became more discerning and ended up giving just four of the sixteen awards to houses that would equally be at home in Architectural Digest if a stylist came in and made the houses more homey. 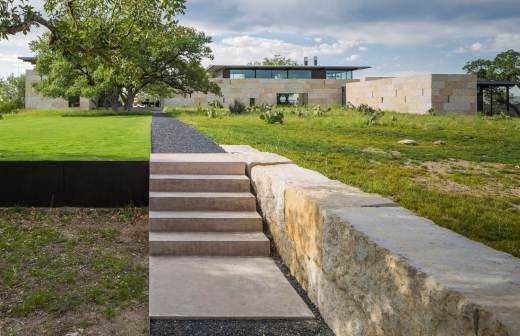 Impressively, two of the winners were designed by Lake/Flato Architects, the standard bearers of the style and the firm that pumps out new practices that know how to do this stuff, at least according to the Texas design scene experts that “observed” our deliberations.

As a result of our discussions, we picked two houses that perhaps self-consciously aimed for a language and focus outside of the Texas tectonic mainstream. The first was by Vincent Synder, someone who I later met at a University of Texas post-review party (I swear, I didn’t tell him that we had very recently given him an award). His house eschewed the high end Mies/Scarpa/Kahn details for a more humble and conceptually interesting stud wall language that both made the house more barn-like and referenced early Frank Gehry (where Vince, it turns out, once worked).

The other outsider house was designed by Karen Lantz of Lantz Full Circle. As I wrote in a snappy synopsis of our comments: “An intensely personal architectural collage that self-consciously includes both off-the-shelf and highly customized elements. Surprisingly, the sheer density of architectural moves hold together because of the sensibility of the architect and the high level of craft throughout.” It’s worth looking at the goofy video tour of the house to get the full flavor.