The Olympics, Boston’s Back Lot, and Yale

Massport owns a large underutilized area of land south of Summer Street and just west of the Reserved Channel that has been off the radar for decades, even as the Innovation District fills in and the Convention Center Authority is making some important moves along D Street. There have been two reasons for this stasis. The first had to do with development politics that played out fifteen years ago when the first round of development was happening on the Waterfront (mostly within Massport’s Commonwealth Flats district and including the Seaport Hotel and two office buildings) and with the planning for the new convention center. Jim Kelly, a South Boston-based city councilor, drew a line in the sand (actually, land fill) that kept big vision development planning north of Summer Street away from the traditional South Boston community. His political pressure ultimately resulted in a hotel ban south of Summer Street, thus stymieing development speculation on vast tracts of land between Summer Street and the northern fringe of the South Boston residential fabric.

The other reason Boston’s “Back Lot” has remained underutilized has to do with the growing shortage of centrally located land for potential strategic industrial uses. During the past few years, the area has either been pinpointed as a potential expansion area for the Conley Terminal, Boston’s deep water port – specifically earmarked for overflow storage and staging for shipping containers – and/or as the location for Boston’s US Post Office distribution center, which needs to be moved from its current Fort Point Channel location to make way for sorely needed South Station track expansion. Both of these potential uses are interwoven into big picture Commonwealth of Massachusetts economic development initiatives, despite the relative lack of glamour of the uses themselves.

Yet despite the politics that embalmed the area and more recent rational planning arguments, the area by now is conspicuously underdeveloped and surrounded by ever-increasing land values. No wonder the district is a source of fascination to university-based design studios and visiting delegations of developers and planners that can’t help but notice the huge waterfront-facing desert smack in the middle of Boston’s dense and diverse urban matrix.

With this as a backdrop, enters the contentious initiative to bring the 2024 Olympics to Boston. Rumor has it that Boston’s Back Lot is one area that the consortium of backers has been studying as a location for the Olympic Village; a rumor with enough plausibility – and creative juice – that Yale’s Ed Mitchell adopted the proposition as the problem for fifty Yale School of Architecture graduate students. Importantly, the schemes they have been testing provide more important lessons for how to think about this area than specific strategies for the Olympic planners. In almost all cases, the student proposals weave the reconfigured edges of the southern terminus of the Reserved Channel with an extension of the existing street network to create a new center of gravity in what was once a no man’s land. The schemes don’t just provide the required program, adopted from the requirements that the New York Olympic backers used for their failed bid, they help make sense of edges of the disparate neighborhoods that surround the site and provide open space resources in a part of the city that is far from the Emerald Necklace and the shiny new waterfront a half a mile to the north. Perhaps the Olympics will provide the necessary excuse to look proactively at this area and not just preserve the land for problems, however legitimate, that originate elsewhere.

This proposal by Alissa Chastain and Elena Baranes weaves streets and canals at the scale of Amsterdam’s historic districts. 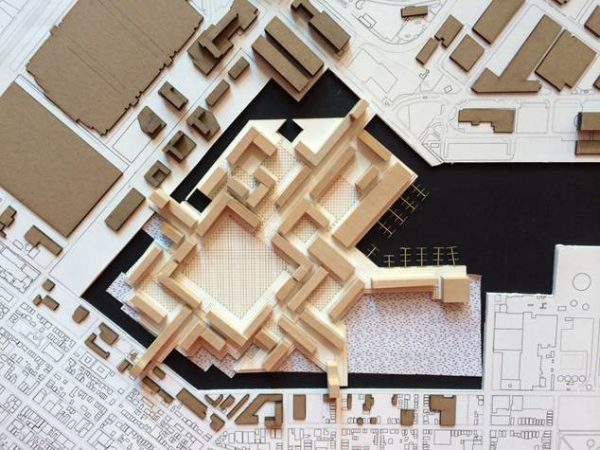 A scheme by Leah Abrams and Mark Peterson was inspired by the neighborhoods of Venice. The large green square, a Boston version of the Venetian campo, is about the same size as the Public Garden and is intended to be an open space resource for the entire South Boston peninsula.

The Reserved Channel is resolved in a water basin organized on the street grid of the west end of South Boston in a proposal by Meghan McAllister and PJ Nakamura. Small piers contain rowhouses with restaurants and other public functions at their ends. A series of market halls frame the terminus of the Channel.

Update: See our additional posts on Boston Olympic planning, including a piece on the appropriate architectural character for the Olympic Village and ways that the costs of construction can be recouped by creating a highly marketable waterfront residential community.